Together with physicians and researchers from the University Hospital of Munich (LMU), CPC-M physician and DZL scientist private lecturer Dr. Anne Hilgendorff has demonstrated a reduction of the fetal lung volume in mothers who had undergone an uncomplicated SARS-CoV-2 infection during pregnancy. This reduction was particularly evident when the infection had occurred in the last trimester of pregnancy. The results of the study have now been published in the journal Lancet Respiratory Medicine.

The research led by Prof. Dr. Sophia Stöcklein from the Department of Radiology at LMU Hospital and private lecturer Dr. Anne Hilgendorff from the Center for Comprehensive Developmental Care at LMU Hospital and Helmholtz Munich examined a total of 34 pregnant women and fetuses, respectively, using prenatal magnetic resonance imaging (MRI). Prenatal or fetal MRI is a highly specialized examination method which allows an examination of the development of fetal structures in detail even before birth. The women had been infected with the alpha variant of Corona virus at different time points, confirmed by PCR testing. The lungs of the fetuses were measured by magnetic resonance imaging, lung volume was determined and compared with fetuses from a reference cohort in which no infection had occurred during pregnancy. The data were collected before vaccination against SARS-CoV-2 was available.

"The fetuses of pregnant women who tested positive for SARS-CoV-2 had an overall reduced lung volume compared to the reference cohort," Sophia Stöcklein explained. In the fetuses in the third trimester, the effect was particularly pronounced, with an average of 69 percent of the expected average value for normal lung development.

One possible explanation for this phenomenon could be the transfer of the virus across the placenta into the amniotic fluid and from there into the fetal lungs. "In this context, the third trimester in lung development is particularly characterized by the maturation of important cells at the gas exchange surface," explains Anne Hilgendorff, "a contact of these cells with the virus could cause a change in lung development."

But: the newborns were fine immediately after birth; they were not conspicuous with respiratory distress or other adaptation disorders. To what extent the reduced fetal lung volume could be of importance in further development, the researchers want to observe in follow-up studies until the children's second and fifth year of life - with questionnaires on lung development and potential lung diseases.

In general, the researchers advocate for further studies to follow up children - including neurological development - whose mothers have been SARS-CoV2 positive during pregnancy. "Our study results could be seen as another factor reinforcing the vaccination recommendation for pregnant women," the researchers explain. 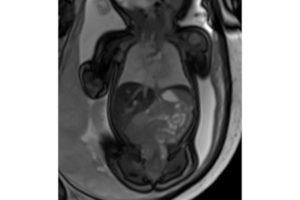 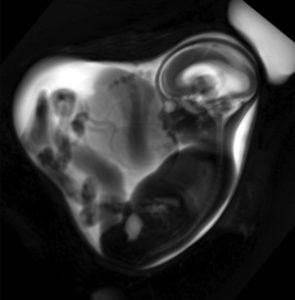 Fetal MRI is a specialized imaging method of prenatal diagnostics that can be used from the beginning of the 18th week of pregnancy. Fetal MRI allows the precise determination of the fetal lung volume. (Image source: LMU Klinikum)

Why some people suffer more from COVID-19 than others

DZG statement on the Russian invasion of Ukraine