The second Annual Reception of the DZL Academy took place on 22. January 2020 in Lübeck-Travemünde as a kick-off event for the 9th Annual Meeting of the German Center for Lung Research (DZL). 116 early career researchers from five DZL-sites used the opportunity to meet each other and to form new networks. 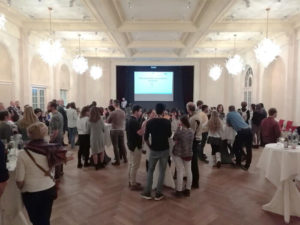 The highlight of the 2020 Annual Reception of the DZL Academy was a quiz, which broke the ice between the 116 lung researchers and tested their knowledge on the DZL, the lung and local trivia.

The DZL Academy was established in 2018 to promote and support lung researchers of the DZL in the early stages of their careers. One important aspect of this support is to facilitate the exchange between more than 300 Academy Fellows and to encourage collaborations across all DZL-sites.

The 9th Annual Meeting of the DZL at Lübeck-Travemünde provided the perfect setting for the Annual Reception. Immediately after their arrival, all 116 postgraduate students and postdocs of medicine and the life sciences entered the White Hall of hotel A-Rosa, which is situated just 300 m from the beach.

The event was opened by two DZL Academy Board Members - Dr. Rory Morty (UGMLC) and Professor Silike Meiners (CPC-M). They introduced the organisation team, which was formed by five DZL Academy Fellow Representatives Svenja Gaedcke (BREATH), Christina Malainou (UGMLC), Sebastian Marwitz (ARCN), Carmela Morrone (CPC-M) and Magdalena Szcygieł (TLRC). All of them had been elected into their positions last year, during the first DZL Academy Fellow Reception in Mannheim. Now, they are contributing to decisions made by the DZL Academy Board and were key in organising the event.

They came up with the idea of an entertaining quiz, which was the highlight of the Reception and broke the ice between the participants. The 18 quiz teams consisting of 4-6 people were mixed in a way that participants from different sites were able to get to know each other. Some of the questions, like „What’s the weight of an average human lung?“ and „How big is the average surface area of a human lung?“ might have been easy to answer for most of the lung researchers. However, questions about local trivia made everyone’s head spinning, as it was not easy to guess what the meaning of „Seute Deern“ or „Krüsch“ might be. Lucky were those, who had locals in their team, everyone else simply had to guess the right answer.  Two teams answered 23 of the 29 questions and were tied for the first place. Even during another quiz round, both teams answered the same number of questions and thus, prizes were issued to all 11 members of both teams, who each received vouchers worth € 50.

After the quiz, the participants enjoyed a buffet and cold drinks and sat together in a relaxed atmosphere until about midnight. Thus, the Annual Reception contributed to a successful start of the DZL Annual Meeting.

The next DZL-Academy Annual Reception is planned for 2021, at the next DZL Annual Meeting in Hanover.