A team of researchers from the DZL Site TLRC at European Molecular Biology Laboratory (EMBL) and University Hospital Heidelberg (UKHD) has developed a novel tool to measure the activity of two proteins implicated in lung inflammation in cystic fibrosis. The activity of the proteases neutrophil elastase (NE) and cathepsin G (CG) was visualised on extracellular DNA secreted by immune cells (neutrophil extracellular traps - NETs), using the fluorescence-based reporter system FRET. For the first time, this method allowed quantification of DNA-bound NE activity inside the sputum of CF-patients. The results were published in the Journal of the American Chemical Society and might help to advance research into novel diagnostic and therapeutic approaches for cystic fibrosis and other lung diseases involving chronic inflammation.

Most patients with cystic fibrosis (CF) suffer from a persistent inflammation of their lungs, which in the long term leads to permanent structural damage of the airways and consequently a reduction of lung function. The underlying genetic defect that causes CF changes the composition of mucus inside the airways, making it more viscous. This thick mucus blocks the airways and promotes bacterial growth, triggering an immune reaction and resulting in inflammation of the lung.

Neutrophils are cells at the immunity frontline that combat bacterial pathogens on different levels. Firstly, they ingest and destroy bacterial invaders, secondly, they communicate with the immune system e.g. to sustain the immune response. This communication is mediated by various molecules, two of them are the proteases neutrophil elastase (NE) and cathepsin G (CG). Further, neutrophils have a third, more sophisticated way of dealing with bacterial invaders: they secrete their DNA, to form web-like extracellular structures, or so-called neutrophil extracellular traps (NET). These can trap the bacteria and form a scaffold for molecules like NE and CG, possibly helping to locally fine tune the immune response.

But there are also downsides to high neutrophil activity, which become apparent when the inflammation persists – as it does in the lungs of CF patients. One problem is, that the DNA that neutrophils secrete blocks the airways of CF patients even further and disrupts the flow of air. Therefore, DNAses, which degrade DNA, are already used in CF therapy to free the airways and to promote breathing. A second problem of high neutrophil activity is, that the neutrophil proteases NE and CG are known stimulators of inflammation. If their activity is too high, they might contribute to the body’s immune system to attack its own cells, resulting in permanent lung damage. The presence of NE in the lung secretions of CF patients precedes the appearance of bronchiectasis and correlates with lung function deterioration and exacerbations. Therefore, NE and CG might become valuable biomarkers in the future, e.g. to estimate disease severity and to predict exacerbations, or deterioration in lung function.

So far, it has not been possible to study the activity of NE and CG when bound to NETs easily. Methods used in the past were time consuming and involved the sectioning of lung tissue. Therefore, the TLRC team developed a novel fluorescence-based FRET-reporter system to measure the proteolytic activity of CG and NE bound to DNA. Using this tool, they detected elevated levels of NET-bound NE activity in the sputum of CF patients. This is a first promising step towards application of the method in clinical studies. Such studies could shed light on the role of NETs and NET-bound NE and CG in lung inflammation in CF. It could be investigated whether NET-bound NE and CG activity in the sputum of CF-patients could serve as a biomarker, predicting the need for anti-inflammatory therapy. Also, the new technique could help to understand the role of NETs, NE and CG in other lung diseases that are characterised by chronic inflammation such as asthma and COPD. 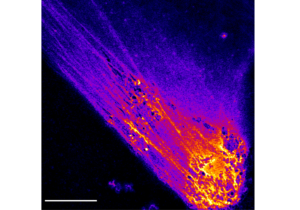 The image shows an immune cell (neutrophil) which has secreted its DNA into the extracellular space in response to an inflammatory stimulus. The DNA forms web-like structures, so-called neutrophil extracellular traps (NETs). Two inflammation promoting proteins ¬- neutrophil elastase (NE) and cathepsin G (CG) - bind to the NETs. The novel method described by Guerra et. al., allows to visualise NET-bound NE and GC activity using a FRET reporter. The higher the activity of the proteases, the brighter is the colour in the image. The scale bar indicates a size of 10 microns.

Breakthrough In The Therapy Of Cystic Fibrosis