DZL researchers of the Translational Lung Research Center Heidelberg (TLRC) have discovered a new link between excessive airway mucus and chronic airway inflammation that is characteristic of cystic fibrosis and chronic obstructive pulmonary disease (COPD). The researchers showed that mucus in the airways reprograms certain cells of the immune system, called macrophages, disrupting their functions and causing them to develop pro-inflammatory properties. In the future, airway macrophages could become the target of novel therapies to treat cystic fibrosis and COPD. The results of the study were published in the journal Nature Communications.

Lung diseases such as cystic fibrosis and COPD are associated with severe mucus obstruction and chronic inflammation of the airways. Acute inflammatory responses to external stimuli are an important host defence mechanisms of the lung. However, patients with cystic fibrosis and COPD experience persistent inflammation, which causes progressive destruction of lung tissue, which in turn favours recurrent airway infections. Researchers have been unable to explain the cause of the ongoing airway inflammation. "Even in the absence of infection, young children with cystic fibrosis already have chronically inflamed airways. We therefore hypothesized that this chronic inflammation may be triggered by mucus itself," says Prof. Marcus Mall, director of the Department of Pediatric Respiratory Medicine, Immunology and Intensive Care Medicine at Charité - Universitätsmedizin Berlin and co-lead author of the publication.

TLRC researchers at Heidelberg University Hospital and the German Cancer Research Center Heidelberg (DKFZ) tested the extent to which mucus plugging of the airways affects certain immune cells, so-called macrophages. Macrophages are “phagocytic cells” that eliminate bacteria, viruses, or dead cells and are thereby counteracting chronic inflammation. Surprisingly, the researchers observed that macrophages from the airways of mice with airways obstructed with mucus had pro-inflammatory properties. The diseased mice had been genetically modified to produce increased airway mucus. They serve as an animal model for cystic fibrosis and COPD in humans. "The macrophages from the lungs of these mice no longer fulfilled their function as phagocytic cells and produced pro-inflammatory mediators," explains Michelle Paulsen, PhD, co-first author of the paper. These findings were confirmed by further experiments in which macrophages from healthy mice were exposed to mucus. As a result, the airway macrophages showed the same changes as those isolated from the lungs of the genetically modified mice.

To explain why airway macrophages that have come into contact with viscous airway mucus show different characteristics than macrophages from healthy airways, the researchers took a closer look at the genetic material of the immune cells. They paid particular attention to the structure and modifications of the DNA in the cell’s nucleus. "We were able to show that certain sections of the macrophage genome were altered in such a way that genes for pro-inflammatory mediators were more accessible," summarizes Prof. Christoph Plass, department head at the DKFZ and co-lead author of the publication. The changes in the DNA were not changes related to DNA sequence, but so-called epigenetic changes that influence the structure of the DNA. The observed changes in macrophage DNA caused a loosening of the DNA structure.

Airway macrophages as a target for new therapies

The results of this study show that severe obstruction of the airways with mucus contributes to chronic airway inflammation by reprogramming airway macrophages, which worsens the symptoms in patients with cystic fibrosis and COPD. The study's findings underscore the importance of mucolytic therapies for treating muco-obstructed lung diseases and open up new avenues for research. "In the future, the altered airway macrophages could serve as a target for the development of new anti-inflammatory therapies for cystic fibrosis and COPD," postulates Joschka Hey, PhD, a scientist at DKFZ and co-first author of the paper. 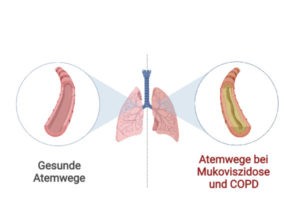 The airways of patients with cystic fibrosis and COPD are clogged with viscous mucus. Researchers of the German Center for Lung Research found that mucus contributes to chronic inflammation of the airways. They showed that certain immune cells (macrophages) develop pro-inflammatory properties and impaired functionality through contact with mucus. (Image: Dr. Joschka Hey /DKFZ / biorender.com)

Updated edition of the monograph „Mutation-specific therapies in cystic fibrosis“